Growing up in Ventura, Calif., Kelsey Martin often had a pencil and sketchbook in her hands, but she was also passionate about gaming. Once she discovered that these two interests could be parlayed into a successful career, she decided to study visual development for gaming at Academy of Art University in the School of Game Development. “I’ve always loved drawing,” she says in her artist’s statement. “I love the visual and non-visual design of games and the wonderful relationship the two create.”

While the first-year curriculum at the Academy is structured to expose students to all aspects of game development, Martin entered the program knowing she wanted to focus on concept art. “I knew what I wanted to do pretty early. The big plus from the school was that because I learned a little bit about all aspects of game art in my first year, I ended up being qualified for a job I didn’t even aim for, which ended up being a really nice foot in the door.”

Four years into pursuing a BFA degree, Martin took her 3D painting skills to San Rafael, Calif., for an internship at Telltale Games. A year later, the award-winning independent video game developer and publisher offered her a full-time position as an associate texture artist. Telltale is behind some of today’s most creative and popular titles, including Jurassic Park: The Game, Minecraft: Story Modeand The Walking Dead: Season 3. Martin explains she secured a job at Telltale on the strength of her portfolio and with a little luck.

“Getting your portfolio into the right hands can be a struggle,” she says. Her advice for pursuing game development careers? “Talk to people. It’s still actually one of the hardest things for me to do, but good communication in a fast-paced work environment like Telltale is crucial—so be sure to pick your instructors’ brains.” 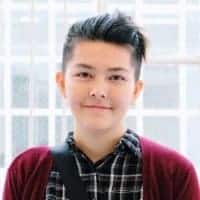 When she first joined Telltale, Martin focused on texture polish on simple props. Later, she moved on to UV mapping and texturing from scratch, which led to full environment support, prop modeling and damage textures for characters (like realistic stab wounds). At Telltale, she gets to work on some of the most popular games in the world.

“I started on Game of Thrones, near the end of Episode 1, so I was lucky enough to have work featured in the whole series,” she says. “I worked on a few episodes of Tales from the Borderlands as well, and that’s when I started doing real character texture work. I even got to texture the final boss on the last episode, which was extremely fun.”

Most recently, Martin did character texture work for The Walking Dead: Michonne—A Telltale Miniseries and vehicle, prop and character work for Batman.