Home » Creativity in the Cloud

New Graphic Design graduates Julia Lemke and Michael Taylor have something to go with their freshly earned diplomas from the Academy of Art University: a brand identity for a major corporation. In a collaborative effort between Adobe and the university, Lemke and Taylor developed the concept and visuals for Adobe’s new Creative Cloud educational campaign.

“Real-world” partnerships with creative powerhouses like Adobe are a signature feature of the teaching process at the at the university. In this case, the students were also paired with a widely respected design professional, Jamie Calderon of the San Francisco studio Tolleson.

Working with Doug Beach, creative director at Adobe, Calderon took on the responsibility of mentoring and advising the students. But Lemke and Taylor led the creative effort and produced the final results. The result is a sparklingly imaginative and visually captivating identity that represents all dimensions of “Make It With Creative Cloud.” 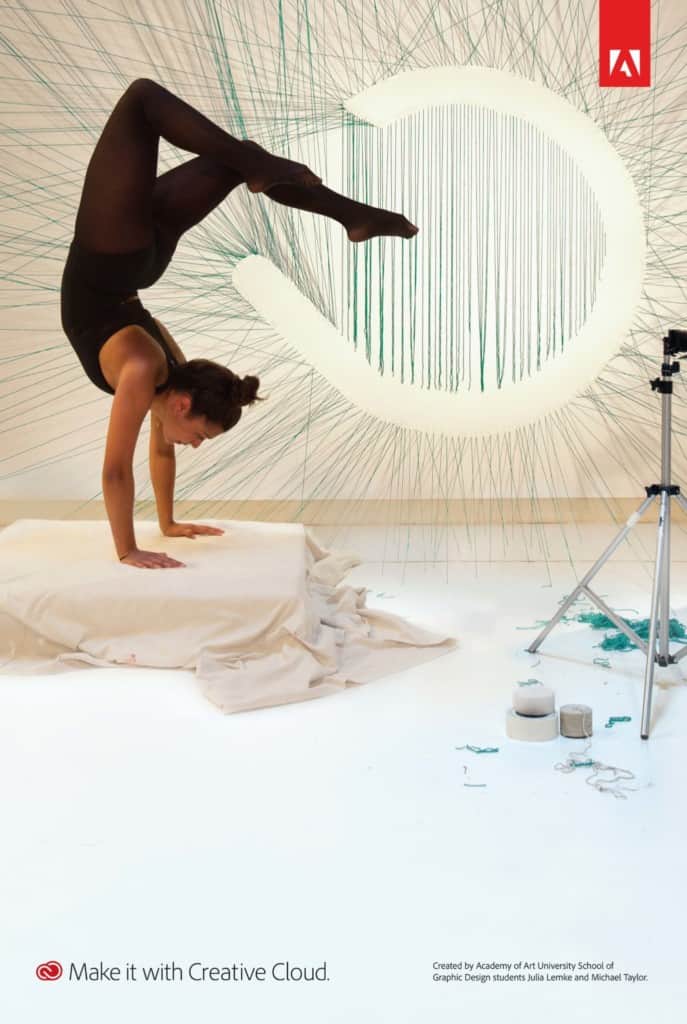 Here, Calderon shares behind-the-scenes glimpses of how the project came about…but first, see what the students produced and what they had to say about the process in this video:

How did you become involved?
Calderon: Tolleson has worked with Adobe on their brands for about eight years—specifically, in the last couple of years we’ve helped them launch their Creative Cloud offering. They called and asked if I could mentor some students on a new Creative Cloud campaign.

This year Adobe wanted actual students to participate, but they wanted to make sure the students were guided properly. With us knowing the breadth of the brand and the nature of the Creative Cloud offering, we could be there if the students needed help…someone to turn to if they had questions. It can be a daunting task when students are focused on their schoolwork, then have to jump into the corporate world.

It’s amazing they got the project done on a really fast timeline. It was pretty speedy! 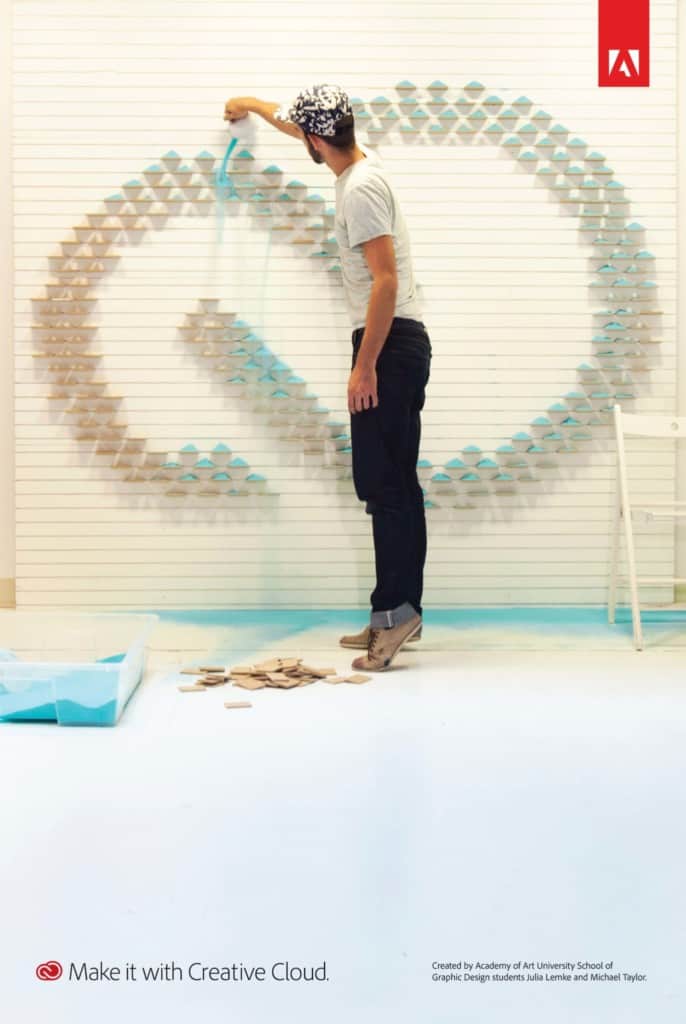 What was the timeline?
Start to finish, two weeks of concepting, a week of planning and a week of production—about a month. And they did it over their spring break.

How were the students selected?
We wanted to find two students who had a breadth of talents, not just as image makers, but also as artists across all mediums. Adobe wanted the project to be more of an installation, not just a print project or a traditional graphic design project, something all creative people could celebrate and feel like they’re part of. 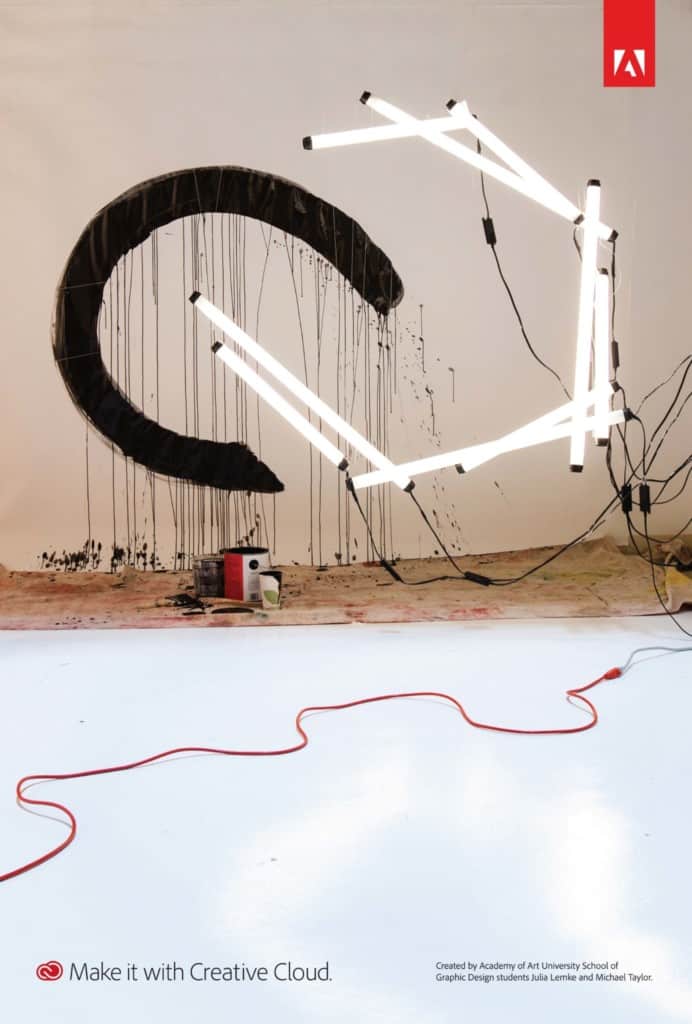 That’s pretty much what the Creative Cloud is about—all disciplines use it. Adobe wanted the campaign to work for all kinds of creative people, including students, and not just design professionals.

We got portfolios from Mary Scott, the Graphic Design chair at the Academy, and Phil Hamlett, the graduate director. Together, we chose Julia and Michael based on the range of their work. For being such young students [both graduate with BFAs this semester], they have a huge range: they’re sculptors, image makers, photographers. They seemed like the perfect fit for this project.

Where did the work take place?
The students came over to our offices several times and we developed directions. Because the timeline was short, we had to work out concepts that could be done on schedule. There was also a budget, too, so we couldn’t go crazy with our ideas.

We went through several rounds of concepting. Much of the production was over a week at Adobe’s headquarters here in San Francisco. The space Adobe offered us looks like a white gallery room in the building’s basement, but you can look down from the lobby and see the whole room. So in a sense the students were on display throughout the whole production phase. Adobe employees would look down every day to see what had been happening, which was fun. 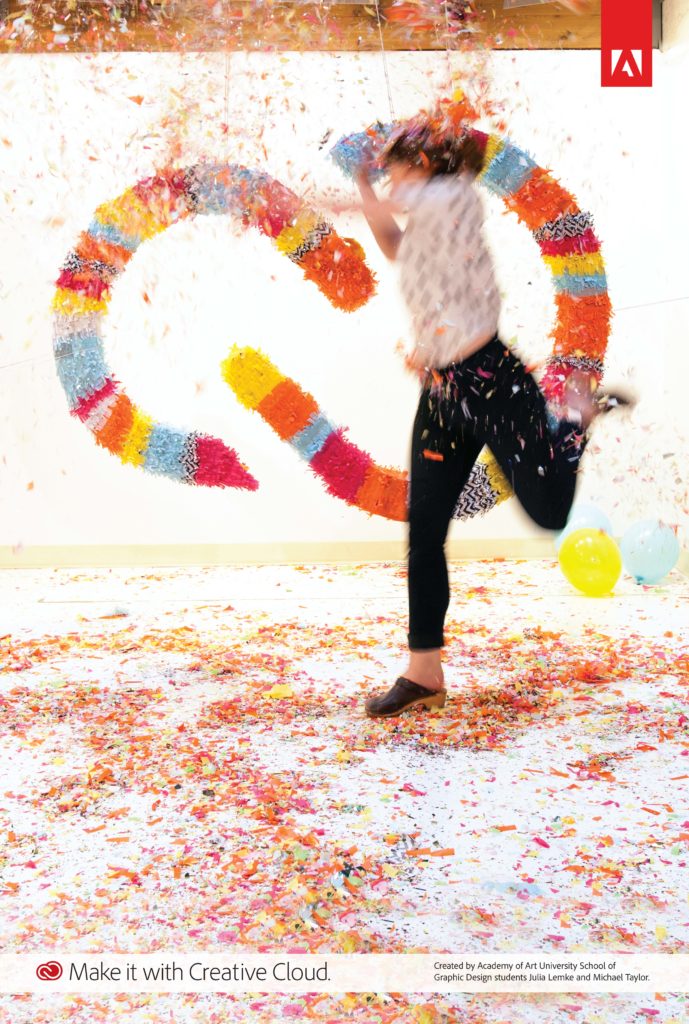 Were the pieces of the final project produced all at once, or were they produced in a series of sessions?
With the scale of this project, there were lots of different elements, from confetti to wire sculpting to installations…paint being exploded, a contortionist…so many different mediums that we had to put two or three installations together on a series of days. Some of the installations were partially completed elsewhere, then reinstalled and finished at Adobe’s headquarters. Making the schedule and carrying it out was a really interesting process.

There’s a central concept that spans all of the installations in the project. How would you describe it?
To distill it down in its simplest form, it’s all about connections. The two Cs in Creative Cloud, which mirror each other, represent connection. That’s the formal mark of the Creative Cloud. The students’ concept was to have different treatments on either side of the Cs. The idea is to show traditional mediums connecting with modern technology. That’s what the Creative Cloud is about: creativity and the software to allow you to do anything you can think up. 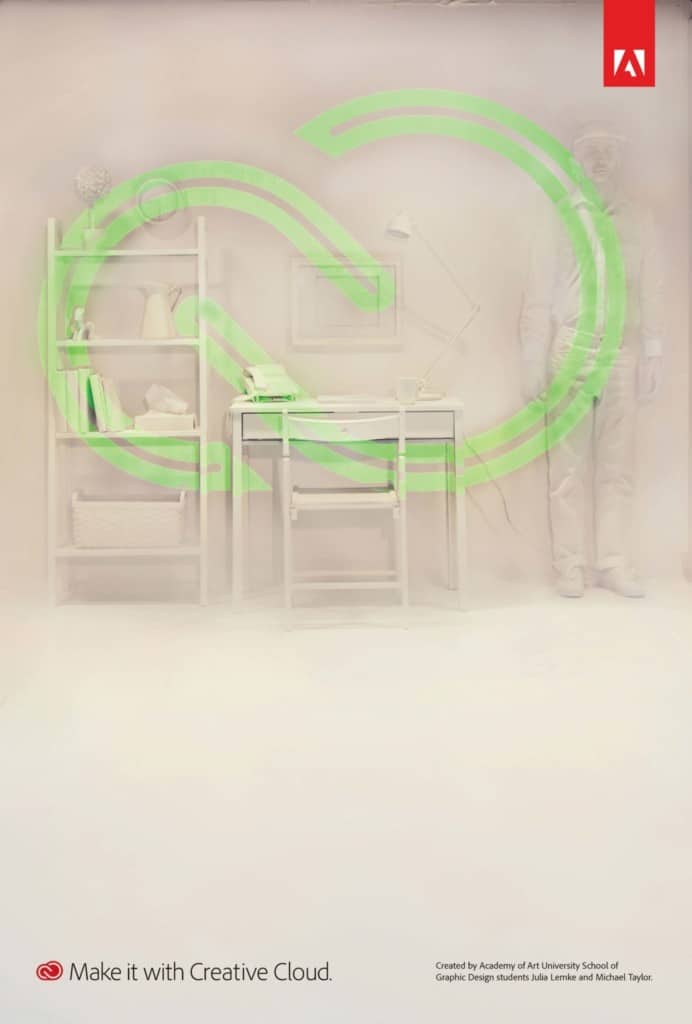 What about your personal involvement in this project?
I have to say I liked the tight timeline. My feeling is that a project is never really done until it’s due. If you have a month, it’s going to be done in a month. The spontaneity that comes along with that is a lot of fun. The energy that stays alive in a short time frame is great. Seeing the students shoot for the stars and capture their ideas was gratifying.

The installation idea—watching the ideas being built—allowed for a lot of onsite energy. The ideas may not have come into form exactly as they were envisioned, but the happy accidents that occurred made them better than envisioned.

Being in the middle of all this was fascinating. In terms of the connections, I graduated from the Academy [with a BFA in 1996] and taught there for about 10 years. I use Adobe tools and work professionally on Adobe identities and projects.

Did you see changes in the students during the project?
Huge changes. In the beginning, they were kind of shy, eyes wide open, wondering how it was that Adobe chose them. Then as they challenged themselves and their creativity came out; they developed confidence. Instead of asking, “Can we do this?” they began to say, “We can do more.” They blossomed.

It’s such a great time for them to be winding this up. They’re graduating, so it’s a perfect moment to be feeling that confidence. This experience will help prepare them for their professional careers.